Deprecated function: The each() function is deprecated. This message will be suppressed on further calls in _menu_load_objects() (line 579 of /homepages/24/d437680662/htdocs/expert/drupal-7.35/includes/menu.inc).

The EXPERT project comes to an end 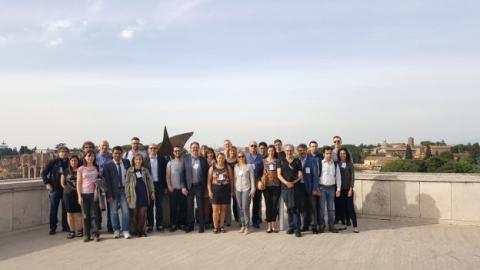 EXPERT (EXPloiting Empirical appRoaches to Translation) was a Marie Curie FP7 Initial Training Network project with the aim of training young researchers, namely Early Stage Researchers (ESRs) and Experienced Researchers (ERs), to promote the research, development and use of hybrid language translation technologies. The overall objective of EXPERT was to provide innovative research and training in the field of Translation memory and Machine Translation Technologies to 15 Marie Curie Fellows.

With a consortium consisting of 6 academic partners, 3 commercial partners, and 4 associated partners, the project started in October 2012 and ran for 4 years until the end of September 2016. More information about the partners can be found here.

Four training events were organised over the life of the project. Core Training, held in Birmingham (UK) in November 2013; Complementary Training, held in Dublin (Ireland) in September 2014; the Scientific Workshop, held in Malaga (Spain) in June 2015; and finally the Business Showcase, held in Rome (Italy) in April 2016.

The ESRs and ERs have worked collaboratively on several projects as well as on their own work, in addition they have had the opportunity to work with both academia and industry. Now the time has come for each to take their newly developed expertise and show the world what they are made of. We wish each and every one of them the very best of luck with their future endeavours, and as co-ordinators RGCL would like to thank all of the partners that have been involved. It has been a fantastic four years and it has been a pleasure working with you all.

This project has received funding from the European Union’s Seventh Framework Programme for research, technological development and demonstration under grant agreement no. 317471